YAY SPORTS! 😀 I totally didn’t plan this, but I love sports, and this makes me a happy girl. (Not planned meaning Sierra’s post on Saturday, and now this one. Cuz you know, there actually aren’t that many sports romances out there… And today we’re welcoming back the fabulous Kat Latham! Her debut book was released to the wild just this Monday!

She’s here to talk about romance novels that she loves. That deal with sports Double win.

My love of sports romance started with Susan Elizabeth Phillips’ Chicago Stars series and it was sealed when I discovered Rachel Gibson’s Chinooks hockey team. Oh, the hawtness!

And I’m clearly not the only one who loves those series. I recently went on Goodreads and found a list of sports romances. Readers can vote for their favorite sports romances by putting them in a list.

I started to rank my ten favorites, but when I got to number eight I decided to leave the last two spaces free so I can discover new novels. So here are my top eight.

Dallas TV morning show host Madelyn Cornish is poised, perfect, and unflappable, from her glossy smile to her sleek professionalism. No one knows that her iron will guards a shattered heart and memories of a man she’s determined to lock out. Until that man shows up at a morning meeting like a bad dream: Billy Wilkins, sexy hockey superstar in a tailspin—still skating, still fighting, and still her ex-husband.

Now the producers want this poster child for bad behavior to undergo an on-air makeover, and Billy, who has nothing to lose, agrees to the project. It’s his only chance to get near Maddy again, and to fight for the right things this time around. He believes in the fire in Maddy’s whiskey eyes and the passion that ignites the air between them. This bad-boy heartbreaker wants a last shot to be redeemed by the only thing that matters: Maddy’s love.

THIS IS JANE: A little subdued. A little stubborn. A little tired of going out on blind dates with men who drive vans with sofas in the back, Jane Alcott is living the Single Girl existence in the big city. She is also leading a double life. By day, she’s a reporter covering the raucous Seattle Chinooks hockey team—especially their notorious goalie Luc Martineau. By night, she’s a writer, secretly creating the scandalous adventures of “Honey Pie”…the magazine series that has all the men talking.

SEE JANE SPAR: Luc has made his feelings about parasite reporters—and Jane—perfectly clear. But if he thinks he’s going to make her life a misery, he’d better think again.

SEE JANE ATTRACT: For as long as he can remember, Luc has been single minded about his career. The last thing he needs is a smart mouthed, pain in the backside, reporter digging into his past and getting in his way. But once the little reporter shed her black and gray clothes in favor of a sexy red dress, Luc sees that there is more to Jane than originally meets the eye.

3. This Heart of Mine by Susan Elizabeth Phillips (SEP) (Another of my favorites, and the kindle book is $4.99!)

Molly Somerville loves her career as the creator of the Daphne the Bunny children’s book series, but the rest of her life could use some improvement. She has a reputation for trouble that started even before she gave away her fifteen-million-dollar inheritance. Then there’s her long-term crush on the quarterback for the Chicago Stars football team her sister owns—that awful, gorgeous Kevin Tucker, a man who can’t even remember Molly’s name!

One night Kevin barges into Molly’s not-quite-perfect life and turns it upside down. Unfortunately, the Ferrari-driving riving, poodle-hating jock isn’t as shallow as she wishes he were, and she soon finds herself at a place called Wind Lake. Surrounded by paintbox cottages, including a charming old bed-and-breakfast, Molly and Kevin battle their attraction and each other as they face one of life’s most important lessons. Sometimes love hurts, sometimes it makes you mad as hell, and sometimes—if you’re lucky—it can heal in a most unexpected way.

Chicago Stars quarterback Dean Robillard is the luckiest man in the world: a bona-fide sports superstar and the pride of the NFL with a profitable side career as a buff billboard model for End Zone underwear. But life in the glory lane has started to pale, and Dean has set off on a cross-country trip to figure out what’s gone wrong. When he hits a lonely stretch of Colorado highway, he spies something that will shake up his gilded life in ways he can’t imagine. A young woman . . . dressed in a beaver suit.

Blue Bailey is on a mission to murder her ex. Or at least inflict serious damage. As for the beaver suit she’s wearing . . . Is it her fault that life keeps throwing her curveballs? Witness the expensive black sports car pulling up next to her on the highway and the Greek god stepping out of it.

Blue’s career as a portrait painter is the perfect job for someone who refuses to stay in one place for very long. She needs a ride, and America’s most famous football player has an imposing set of wheels. Now, all she has to do is keep him entertained, off guard, and fully clothed before he figures out exactly how desperate she is.

But Dean isn’t the brainless jock she imagines, and Blue—despite her petite stature—is just about the toughest woman Dean has ever met. They’re soon heading for his summer home where their already complicated lives and inconvenient attraction to each other will become entangled with a charismatic but aging rock star; a beautiful fifty-two-year-old woman trying to make peace with her rock and roll past; an eleven-year-old who desperately needs a family; and a bitter old woman who hates them all.

As the summer progresses, the wandering portrait artist and the charming football star play a high-stakes game, fighting themselves and each other for a chance to have it all.

5. Heaven, Texas by SEP (One of my most favorite romances of all time!)

Come heck or high water, Gracie Snow is determined to drag the legendary ex-jock Bobby Tom Denton back home to Heaven, Texas, to begin shooting his first motion picture. Despite his dazzling good looks and killer charm, Bobby Tom has reservations about being a movie star — and no plans to cooperate with a prim and bossy Ohio wallflower whom he can’t get off his mind or out of his life. Instead, the hell-raising playboy decides to make her over from plain Jane to Texas wildcat.

But nothing’s more dangerous than a wildcat with an angel’s heart in a town too small for a bad boy to hide. And all hell breaks loose when two unforgettable people discover love, laughter, passion — and a match that can only be made in Heaven.

6. Ride With Me by Ruthie Knox

When Lexie Marshall places an ad for a cycling companion, she hopes to find someone friendly and fun to cross the TransAmerica Trail with. Instead, she gets Tom Geiger—a lean, sexy loner whose bad attitude threatens to spoil the adventure she’s spent years planning.

Roped into the cycling equivalent of a blind date by his sister, Tom doesn’t want to ride with a chatty, go-by-the-map kind of woman, and he certainly doesn’t want to want her. Too bad the sight of Lexie with a bike between her thighs really turns his crank.

Even Tom’s stubborn determination to keep Lexie at a distance can’t stop a kiss from leading to endless nights of hotter-than-hot sex. But when the wild ride ends, where will they go next?

Baseball player Wade O’Riley’s bad-boy image is about to be cleaned up by publicist Samantha McNead. But the sexual tension between them is about to drive Wade to his knees.

(Seriously I tried looking everywhere for a back cover copy, and was absolutely unable to find it. 2010 when the book was released is about the time I hardlined only buying books in e-format, so I can’t even check. Like I did with See Jane Score.)

8. The Winning Season by Alison Packard

Kelly Maxwell has finally landed her dream job as publicist for the San Francisco Blaze. But the team’s newest member, handsome bad boy catcher Matt Scanlon, is refusing every interview. She’s got to get him to open up before the season ends, or she may not be back next year. And after everything she overcame to achieve her dream, Kelly’s not about to let that happen.

Matt Scanlon just wants to be left alone to rebuild his life and his career. After a year of masking the pain of a recent loss with hard partying and fast women, he finally hit rock bottom and was traded to a team he’s loathed his entire life—a team with little to no chance at the post-season.

Butting heads is getting Kelly and Matt nowhere but annoyed, and with the team’s schedule on the road, they can’t avoid close quarters—or their surprising attraction to one another. As the season winds down, Matt finds his growing feelings for Kelly have brought his numbed emotions back to life. But when betrayal shatters their fragile trust, winning it all seems more impossible than ever.

On Monday my debut novel Knowing the Score was released into the digital world, and I’m really hoping that readers love the rugby team I created, the London Legends, as much as I’ve loved SEP’s Chicago Stars and Rachel Gibson’s Chinooks hockey team.

This week on my blog I’m giving away London Legends T-shirts, bags and other cool stuff, as well as the latest contemporary romances by my fellow Carina Press authors. Visit my blog to enter the daily giveaways! 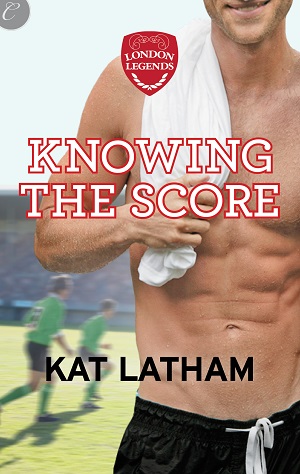 Book one of the London Legends
Rugby player Spencer Bailey is determined to win a spot on England’s World Cup team. But with a month break before the selectors start watching him, he’s eager to have fun with a woman who knows the score: the relationship will end when rugby season begins. The lovely American Caitlyn Sweeney seems perfect for the role of temporary lover, since her visa will run out soon anyway.

Caitlyn works for an international disaster relief organization and can handle the world’s worst crises, but she flinches from her own. Her past has left her with a fear of intimacy so deep that she has trouble getting close to anyone—until she meets sexy Spencer. His hot body and easygoing nature are too much for even her to resist.

Neither Caitlyn nor Spencer expects to fall hard for each other. But with their relationship deadline approaching, the old rules of the game seem less important than before…until past secrets surface, challenging everything they thought they knew about each other.

What are your favorite sports romances? What books do you suggest I read and maybe add to my list?

And remember to congratulate Kat on her book release! Whee!