*Note: I was going to do two recipes, but this got long, so we’re sticking to one. I have no idea what either of these go with, but, whatever. Szechuan Chicken Salad, and … well, next time is roasted pork belly. Because who doesn’t love pork belly? (P.S. It’s just bacon, but not cured and smoked.) 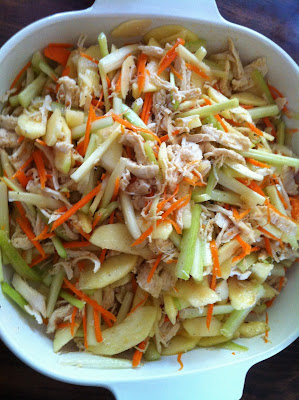 First up, the chicken salad. It’s good for fall too, although since I delayed so long apples are as in season as they were. But you know, it’s not as if apples are hard to find year round. What do you need? Chicken, celery, carrots, and apples. I’m actually not at all a fan of sweet and savory dishes, so the fact that I can recommend this says something. I was hanging out with my dad one weekend, and he had to bring food to a Bible study pot luck, so I came up with this.

Of course you wash everything – so that’s not really a step. Once done, cut the celery and carrots into 2″ pieces, then julienne it. (Cut it into thin strips.) For the chicken, you can use chicken tenders (we did), or even a rotisserie chicken from your grocery store. We took frozen chicken tenders, and just boiled them. Shred the chicken. The apples, slice them thinly. I’d say halve then quarter each apple, cut out the core, and keep slicing – use a mandolin(e) if you have one or prefer using that.

Add salt and pepper to taste… and now we get to the Szechuan aspect. Hmm… ok, so I guess we’ll do this. Ingredients being more specific… three medium sized apples. Probably five or six stalks of celery, and two large carrots. And a pound of chicken tenders, or half the rotisserie chicken. Now, you need and want sesame oil. Pour about 1.5 T into the bowl and mix. Add Szechuan pepper oil to taste. (If you like extra heat, add in chili oil too.) Mix. Done!

Now… the Szechuan pepper oil is another recipe in and of itself, and can be used for frankly anything savory. Ok… so this recipe can’t be exactly replicated. The reason is… the small peppers we use I’ve never found anywhere else. Google images tells me they might be Bay Leaf Mini Pepper or Pequin Peppers. The latter might be more similar – they’re Sichuan peppers (Szechuan), they’re also called the “Facing Heaven Peppers” or “Heaven Chiles.”

Sesame oil, szechuan pepper corns, dried chiles (anything quality and not smoked), dried shitake mushrooms, and some sort of grinder. A coffee or spice grinder suffices. The picture to the right, incidentally, is the peppers we used that you can’t seem to find anywhere. (My uncle gave us a plant.)

Toast the szechuan pepper corns. Once they’re cooled grind them with the shitake mushrooms, and dried chiles into a fine powder. Heat the sesame oil – not to the smoking point but right before. It’ll shimmer. Dump the powdered ingredients into the pot and  leave it until cooled. OR here’s an easier method: dump everything in the cool oil, cook on low, then once it starts smelling good, cook for about 10 more minutes.

NOTE: If your tolerance for heat isn’t that great, leave the peppers (pepper corns and dried chiles) whole so you can fish them out. Once you can smell it, flip the whole chiles over so you can get all the flavors and essential oils from them. (The bottoms of the dried chiles will possibly be darkened or blackened.)

Once the oil is cooled, put it in a clean jar. If your heat tolerance isn’t that great, make sure you strain out most of the peppers before you bottle it.

So there you go! I hope that made sense… 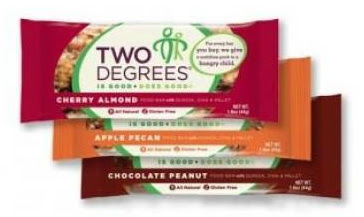 LASTLY! I discovered these Two Degree bars… they’re really good, and all natural – and what’s really cool about them is that whenever you buy a bar, the company also gives food to a hungry child. I know for sure they’re available nation wide in Whole Food stores.