Hi friends! So we’re doing this! Celebrating Smithsonian Heritage Months again! I’ve been asking anyone and everyone to participate, and today we have a contribution from Lynn Balabanos. 😀 I hope you’ll check out what she has to say!

The numerous contributions the Black community has made to the fabric of our country are inspiring and instrumental. Most of us learn about the heavy hitters in school, individuals like Martin Luther King, Jr., Harriett Tubman and Rosa Parks. Important people, absolutely, but they were not alone in their struggles for equality and freedom. In honor of Black Heritage Month, I’d like to share just few of the lesser known heroes and heroines.

Next time you look at a photograph of Washington, D.C., I hope you think of Benjamin Banneker.

He was born in Maryland a free Black man. He was mostly self-educated and drew a reputation for being an amazing mathematician and astronomer. In 1789, he was part of the surveying team that laid out the plans for Washington D.C. When L’Enfant, the Frenchman hired to build the capital, walked off of the site taking all of the plans with him, it was Benjamin who re-created from memory the layout of the streets, parks and major buildings. Without him, our nation’s capital wouldn’t look the way it does today.

Benjamin’s achievements don’t stop there. At the age of 22, he built a wooden clock that accurately kept time, despite having no formal training regarding clock making. He created a crop irrigation system, producing food which prevented US soldiers during the Revolutionary War from starving. Oh, and the Farmers’ Almanac? You know, the book farmers relied on for generations to predict weather and crop planting.* It was invented by Benjamin Banneker, who did all of the calculations himself for the first six years of its existence.

As if that wasn’t enough, Benjamin, throughout a long correspondence, urged Thomas Jefferson to create racial equality and abolish slavery.

Every time you drive or see a firefighter, you should think of Garrett Augustus Morgan. This man saved countless numbers of lives and the modification of his inventions still exist and are in use today.

Garrett Morgan was a prolific inventor. Born in Kentucky, he only had a grade school education. In 1914, he created a safety device, a canvass hood with two breathing tubes. The device would filter smoke backwards while cooling the air inside. This “safety hood” was used by firefighters, who had at that time had almost no protection from the smoke and gases they encountered while in the line of duty. His invention was also used by the U.S. Army and was the precursor for the gas masks used in WWI.

In 1923, Garrett Morgan invented the first mechanical traffic signal, a rudimentary version of the three way traffic light we use today. While traffic lights existed before, Garrett’s included a warning signal to drivers as well as the standard stop and go.

In addition to his successful inventions, he was also an activist and philanthropist. Garrett was a member of newly formed NAACP, gave money for young Black men to go to college and opened the first Black country club.

Every time you donate blood, especially to the American Red Cross, Dr. Charles Richard Drew is who you should think of.

He was born in segregated Washington D.C. but, although he was very bright, he didn’t have enough money to attend medical school. He worked for a few years as a biology instructor and eventually was accepted to McGill University in Montreal, Canada. He graduated second in his class and earned both a Doctor of Medicine and a Masters of Surgery. In 1938, he received a Rockefeller Fellowship to study at the University of Columbia in New York. It was there he was able to continue his work on blood related matters, and he developed a process for preserving blood plasma thereby making it possible to be stored or “banked” for longer periods of time. His doctoral theses entitled “Banked Blood” earned him a Doctorate Degree from Columbia. He was the first African-American in history to earn this degree from Columbia.

When WWII broke out, he was invited by Britain to head up their special campaign, “Blood for Britain.” In this capacity, he collected blood from New York and shipped it overseas where it was used to treat soldiers. He ran the program so successfully that one report says he was able to collect over 14,000 pints of plasma.

As a result of both his research and his work with Britain, in 1941, Dr. Drew was made Director of the first American Red Cross Blood Bank. He successfully created processes and procedures for blood donation and distribution that saved countless lives. Among his innovations, was the mobile blood donation center, much like the ones still in existence today.

Unfortunately, Dr. Drew didn’t stay as director of the blood bank long. When the program started, African Americans were prohibited from donating, per U.S. military rules. This meant that Dr. Drew couldn’t even donate his own blood to the bank he’d not only created but also ran. He fought to change the rules and the result the military relented – but only a little. African Americans were able to donate but their blood was segregated and only used for African American soldiers. Unable to agree to these terms, Dr. Drew resigned in 1942. 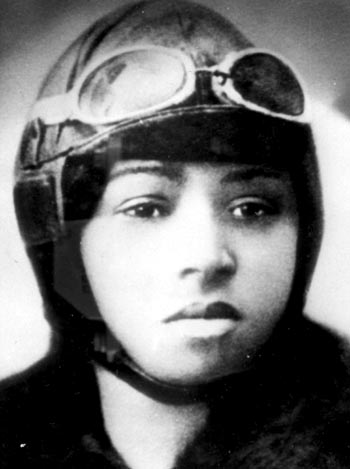 Whenever you go to an air show, or see a pilot doing stunts, think of Bessie Coleman.

She was born in Texas during segregation. Her parents were uneducated and illiterate and Bessie herself went to school in a one room shack. As a young adult, she moved to Chicago and lived with her older brothers, working as a manicurist. It was during this time, listening to the pilots returning from WWI, that she developed an interest in aviation. In 1918, there were very few women pilots and all of them were white and wealthy. Bessie applied to aviation schools across the country but was turned away, her race and her gender a double strike against her.

So, she taught herself French and, taking all of her life savings, moved to France. As you do. She completed flight training at the best flight school in France, graduating in only seven months. She became the first African American woman to hold to hold an international pilot’s license.

Bessie went on to perform at countless stunt shows and became one of the best known aviators of her time, due in large part because of her skill and daring. She dreamed of opening her own aviation school, and routinely encouraged other African Americans to pursue their pilot’s license. In addition, Bessie refused to participate in an event in which African Americans were not welcome.

Sadly, Bessie never lived long enough to establish her aviation school. She died during a stunt in 1926. However, her life and accomplishments inspired generations, including but not limited to Mae C. Jemison, the first African American woman in space who reported took a photograph of Bessie with her on the mission.

These individuals are only a selected few, but there are so many more. Please, take some time this month and check out the Smithsonian’s website. They have lots of fascinating information on historical figures, as well as music, art and so much more. In addition, if you have any stories or interesting tidbits regarding Black Heritage Month you’d like to share, please do so in the comments.

Thanks so much for this post, Lynn! I actually knew about Dr. Charles Drew because of Archer – but I didn’t know he was Black! The more you know! So cool. 😀 (I’d also like to note that Rosa Parks was born on this day 103 years ago! Her deliberate and brave acts truly facilitated change and momentum for the Civil Rights Movement.)

*So I’m pretty sure he didn’t invent the Farmers’ Almanac, but he did publish six Almanacs, with a lot of impressive information, at a time where a Black author was basically unheard of.