You guys! It’s May! I’m here, I’m alive, I have internet, and a new guest – Cindy Pon! She’s an ALBTSALBS first timer, so everyone please give her a very warm welcome!

“There are thousands of other women to choose from. You understand me? And this court runs on ambition alone.” — Zhong Ye from Fury of the Phoenix

Much of Fury of the Phoenix takes place in the inner court of the Palace of Fragrant Dreams, where the concubines reside, inspired by the actual concubine quarters of ancient China. When I was revising the novel with my editor, she actually crossed out “thousands” once and wrote “hundreds?” above it. Toward the end of the Chinese dynasties, some emperors did choose to have fewer concubines in their harems, but for much of history, the Son of Heaven did indeed have thousands of women at his beck and call. Not only was a large harem a symbol of power and status, but it was encouraged that the Emperor sleep with ten to twelve different women each day for optimal health and spiritual benefits.

The palace women came from all walks of life, some given by noble families (both Chinese and foreign) for political motivations and to secure royal favors. Some girls were simply plucked from the cities and countryside by scouts for their beauty or their dancing, singing or acrobatic talents. The best looking were kept in the actual harems, while others were sent to training centers to further improve their artistic talents. The rest were assigned to menial tasks around the palace, so that wherever the emperor went and looked, his eyes would fall on young nubile women.

There was a strict hierarchy among the Emperor’s consorts, from the Empress to concubines ranging from the first grade to the eighth and beyond. Each with imperial emblems for their clothing to specify their rank. There were so many concubines, that actually seeing the Emperor, much less sleeping with him, was a slim chance for most of these women. The women fortunate enough to be chosen were checked for concealed weapons, given a silver ring to identify them, then wrapped in silk, and carried to the Emperor over the shoulder of eunuch. If a concubine was lucky enough to become pregnant (an instant rise in status within the harem), she would be given a gold ring to wear.

Given these dynamics, you can imagine the jealousies, intrigue, plotting and struggle to power within the concubine quarters in the Imperial Palace. 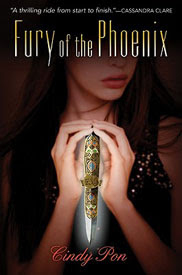 “The Emperor had rolled off Mei Gui, and she rose to pour him a cup of wine. Zhong Ye hoped she would be with child after a few more visits. When the concubine returned to the massive bed, the Emperor was already snoring. She stood at his side, her expression unreadable. He wondered what she felt, what she thought. Her sole purpose in life was to please the Emperor, hope that she made herself alluring enough to catch his eye, to be bedded by him, to have strong sons. She and Zhong Ye both had sacrificed themselves in different ways to gain the Son of Heaven’s favor.” — Fury of the Phoenix

Although most eunuchs were purchased from their families as young boys, castrated then drafted to work in the palace, a select few (such as Zhong Ye in my novel) chose to give up their manhood at a later age for a chance to enter the Imperial Palace, with hopes of rising in rank. But as with the concubines, only the most clever, smart, resourceful, charming and conniving manage in a household of thousands. Li Lien-Ying was one such eunuch, who presented himself for castration and work in the palace at sixteen. He then charmed and ingratiated himself with Empress Dowager Tzu Hsi, so that by the time he was forty, he was one of the most powerful figures within the court. Chief Eunuch Li went on to sell official posts and was believed to have poisoned the Empress Dowager’s rival on her behalf.

These were just a few tidbits from the fascinating history of what went on in the Imperial Palace of China. I did draw inspiration from the research but couldn’t use everything, as much of it was “stranger than fiction” and would have made my story more sensational than I intended! Still, I truly enjoyed the setting and writing that storyline from Zhong Ye’s point of view. It was certainly an unusual choice, having a teen eunuch who was the villain from the first novel, tell his story. But I thought it was essential for Fury of the Phoenix and made sense. And for me, as the author, the most important thing is being true to your characters and their stories.

Hidden Power: The Palace Eunuchs of Imperial China by Mary. M. Anderson and Daughter of Heaven by Nigel Cawthorne were used as references in this post.

Cindy Pon is the author of Silver Phoenix (Greenwillow, 2009), which was named one of the Top Ten Fantasy and Science Fiction Books for Youth by the American Library Association’s Booklist, and one of 2009′s best Fantasy, Science Fiction and Horror by VOYA. The sequel to Silver Phoenix, titled Fury of the Phoenix, was released in April 2011. Her first published short story is featured in Diverse Energies, a multicultural YA dystopian anthology from Tu Books (October 2012). Cindy is also a Chinese brush painting student of over a decade. Visit her website.

And guess what? Cindy has very generously offered one lucky commenter a signed paperback copy of Silver Phoenix to a US resident! (So >.> I guess in the comments please just add if you’re stateside or not?) And … confession – the cover will probably look different – HarperCollins changed it. Alas, because isn’t the one shown gorgeous? And pink! 😀